Building on your imagination...

Constructive Energy was approached by a developer to competitively bid a project designed for a site on the east shore of Lake Union. The owner was dismayed to find all bids beyond comprehension, his budget, and the market. I suggested he engage Philip Christofides, architect, for a new look. The project became a collaboration between the three of us and the challenge was to design and build a project that would fit the site, neighborhood, and budget. The townhomes consist of three joined residences that are slightly stair stepped back to provide, not only interest, but perceived separation between west facing decks.

The units are a reverse floorplan that put living levels on top with views and privacy. A raised front porch tricks a person into only a half flight of stairs to the mid-level and half flight to the lower level from the entry. The units provide a garage, a top floor great room with vaulted ceilings, powder room, and deck. The mid floor features a master bedroom with bath, guest bedroom, guest bath, laundry, and office. The units featured what was originally called #3 maple floors (rustic with lots of color variation and defects). At that time, the wood was inexpensive until later labeled "sugar maple" when it became discovered. The units were featured in the Seattle Times and judged by the AIA as home of the month and later home of the year. The developer was thrilled they sold quickly at full price. 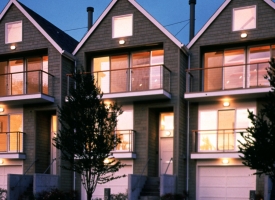 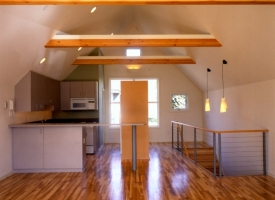 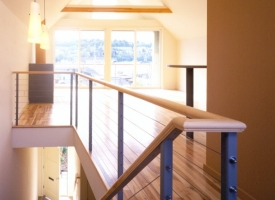